I am a Norn Iron (Northern Ireland for those who like to pronounce all their syllables) local – and over the years, my sneaky fondness for it has developed into full-on love, compounded even more by the fact that I don’t live there anymore. I was fortunate enough to be able to return recently and was delighted to see that the North, and Belfast in particular, was continuing along its path of charming gentrification. I was less fortunate to be exposed to Titanic Fever – columns and columns of newspaper space were saturated with Titanic trivia, century-old reports documenting the sinking, bemused tourists being asked to give their verdict on the brand new Titanic Experience building – ‘great for the city, sure it is!’. I still had to go and visit it, though – that night, rainbow-coloured lights, like refracted prism beams, were projected onto the building’s imposing aluminum walls. They were dazzling. 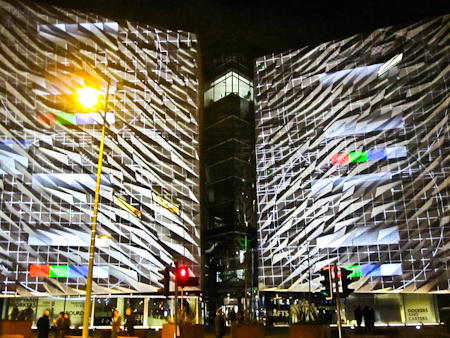 The Titanic Belfast – glorious at nighttime

That wasn’t all that was new for me in Belfast. I like to eat my way around cities so while I was determined to visit old favourites, I sought out new haunts. The Barge, a former canal barge, is moored at the back of the Waterfront Hall and has been lovingly restored into a museum and a café. The food was excellent, and the sunlit, almost Scandanivian setting encouraged even the most hungover of us to start to think about beer again. 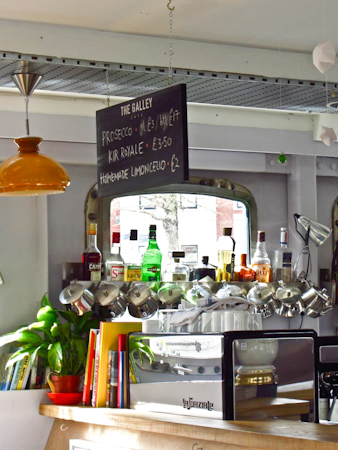 I never need to be asked twice if I want some cake, so a friend took me to Cakes By James, a tiny cake shop that is literally hidden in a building that it shares with art shops, jewellers and galleries (you have to ring a doorbell to get in, and it’s up three flights of stairs). James Watson, a local who curated his talents at bakeries around the world before returning to Belfast, is a magic cake alchemist; when my friend recommended I try the stout and ginger cake, I looked warily at him. When I took a tiny bite, ringed by cream cheese frosting, I was forced to eat my words. Then more cake. 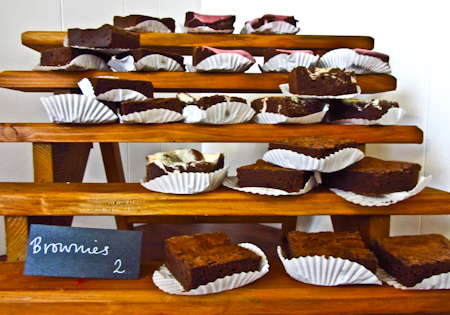 If you’re interested in both food AND history, St. George’s Market  is the obvious weekend destination. Built in the late 19th Century, it is frequently cited as one of the best markets in the UK and Ireland and I would not be inclined to disagree. On Saturdays in particular, there is a broad array of stalls – you can buy a pair of Lego earrings while trying to balance a coffee in one hand, and a Finn MacCool-sized breakfast bap in the other. There’s a hotly contested seating area, where you’re likely to be gutted by a mother with a pushchair before getting to actually sit down. That’s fine, though – bacon sandwiches taste just as good standing up. 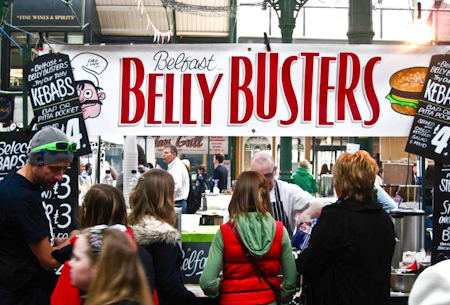 I couldn’t stay and eat in Belfast forever. Northern Ireland offers much more than its alluring capital city. The Mourne Mountains lie a 45-minute drive from the city, near Newcastle, County Down. It’s a local hiking and climbing mecca; the hiking trails have all been vastly improved over the past few years but they retain a rusticity that ensures you definitely need a good pair of boots and plenty of waterproof clothing. The quixotic weather changes mean that you never know what you’re going to get up there, so ensure you are prepared. We got a hailstorm where the wind was blowing the hail into horizontal jags and just as quickly, it blew over us. 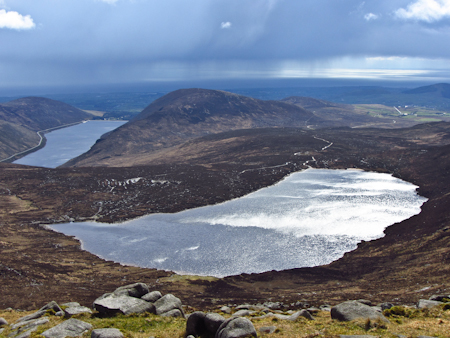 See the storm in the distance?

On the north coast lies the Bushmills Distillery, Ireland’s second most famous whiskey makers (although they have been around longer than Jameson). £7 gets you a short but comprehensive tour and – most importantly – a dram of whiskey at the end. You can choose the basic stuff…or you can try the 1608 anniversary edition,  a spicy concoction that is only available to buy in the distillery and in duty-free.

This post is the merest of whispers, as far the myriad attractions of Northern Ireland are concerned. For a small country, it packs a wallop and  hopefully, someday, it will be synonymous with Dublin whenever visitors think of Ireland’s urban centers. Visit it. Go.

Okay travelers – who else has been to Northern Ireland? What do you think of Korrena’s recommendations? Have any of your own? Let us know in the comments section or via Twitter and Facebook!