India is a country that offers varied languages, traditions, and a diverse topography that changes with each mile you cover. India can be divided into zones – North, South and Central – all three abounding in spellbinding sights and nature’s magnificence. While in the North you can breathe in the crisp mountain air, the Central part is extremely picturesque, draped in rare and beautiful flora and fauna. South India, on the other hand, is a green paradise surrounded by the ocean. The lifestyle of the locals here is mainly inspired by the sea – right from the delicious cuisine to the festivals. Below are the coastal towns that you can backpack through for a pure and rustic experience of South India.

END_OF_DOCUMENT_TOKEN_TO_BE_REPLACED

A cafe is the first hangout place that comes to mind for a reunion with your old school friends or maybe a first date with that cute crush from your office. For travel junkies, a good scale to measure the trendiness of a town is to visit local cafes. No wonder over the years there has been a huge surge in cafes opening doors to visitors with quirky themes. For any business, it’s quite a task to grab the attention of hipsters who are constantly on the lookout for hangout spots that are perfect to up their social game.

Here’s presenting you ten of the quirkiest cafes around the world.

END_OF_DOCUMENT_TOKEN_TO_BE_REPLACED

Of the many spellbinding sights that the world has to offer, some preserve a more haunting quality than others – whether it is by virtue of their tragic, indelible history, or owing to the way they are shaped by the forces of nature – one cannot deny the almost-visceral pull of such places. Harsh reminders of the scars of time, these places can be spotted the world over; from ash-cloaked lands that conceal years of heritage under Mount Vesuvius, to lifeless figures that haunt a derelict amusement park in South Korea. A few others stand as stoic memorials of a time gone by, inviting curious visitors to understand and lament its bygone past.

END_OF_DOCUMENT_TOKEN_TO_BE_REPLACED

‘Great Adventure’ is painted in giant marquee letters on the side of a Victorian mansion on the corner of Hayes Valley’s Octavia and Page Streets. This Ben Eine mural is a constant reminder of the district’s steadfast spirit. Since suffering a crucial blow from the 1989 Loma Prieta Earthquake and subsequent fires, the community has continued to surmount itself. Bold entrepreneurs moved into the area after big-scale renovations had tidied up the neighborhood. Now, twenty-five years later, a unique ambiance has spawned with exciting shops, mural masterpieces, food truck dining, blossoming public gardens, and a relaxed atmosphere. Hidden away in the shadows of Civic Center’s domes, Hayes Valley has risen to contain all ingredients that make San Francisco so special.

When approaching the neighborhood from the east, coming from City Hall, picturesque Linden Street offers the prettiest entrance. Rather than lined-up cars, planters dominate this lively alley. Appropriately titled ‘While You Wait’, a monochromatic mural by Zio Ziegler offers the perfect distraction while waiting in line for Blue Bottle Coffee. Stashed away in a garage, this coffee hut is believed to have the best coffee in town. The New Orleans-style iced coffee, in particular, gloriously kick-starts your morning. The stretch of greenery that lies ahead is Patricia’s Green, the epicenter of neighborhood life. When sun bathing on the park’s lawn, give in to one of Smitten Ice Cream’s many surprising flavors. How about brown cinnamon shortbread or strawberry white balsamic for a change? Consume your icy delight away from local razzle-dazzle in the narrow public gardens flanking Octavia Street. Quoting one of the sayings painted on pieces of wood, ‘let your thoughts pass thru you like wind’ when you perch down on a bench in these fenced botanical retreats. Pass through Page and Laguna Mini Park and zigzag up to Koshland Community Park before fueling up in Samovar Tea Lounge. Sumptuous lunch dishes along with artisan teas are guaranteed to provide you with the kick of energy needed to further explore Hayes Valley. 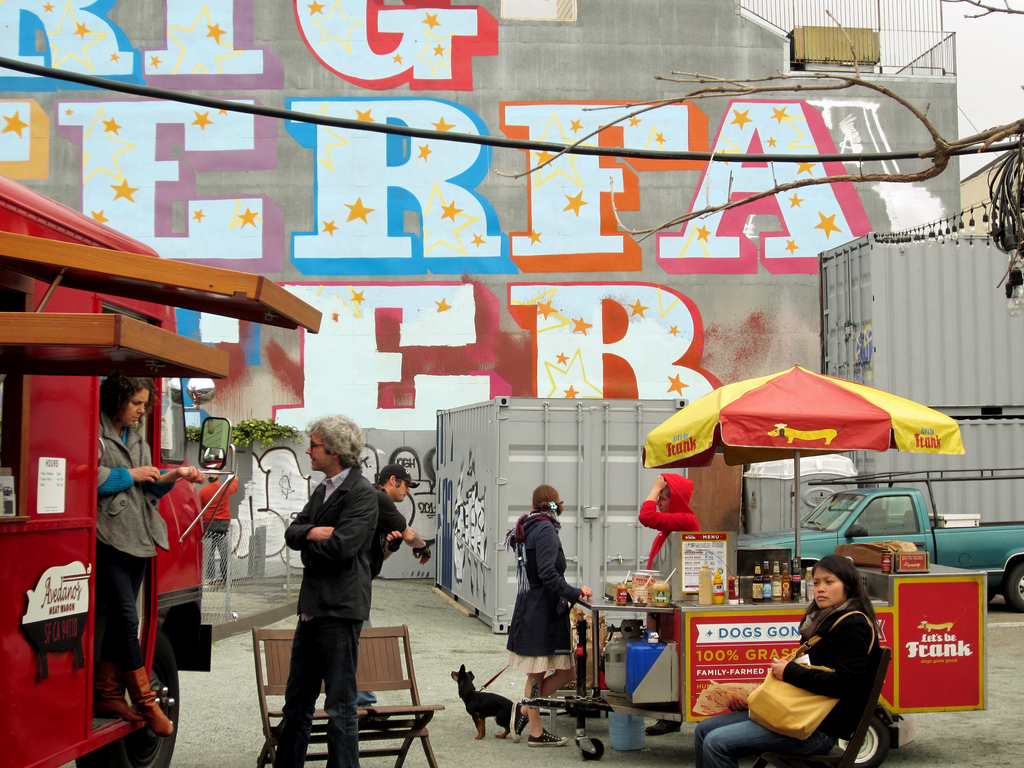 Tree-topped Hayes Street accommodates the area’s trendiest stores. One of the most notable ones, Flight 001, is a traveler’s Valhalla. Decorated to look like the inside of an airplane, this swanky shop sells everything from international power adapters to stylish travel bags. With branches in major cities like Tokyo and New York, setting-up shop here demonstrates the upturn of Hayes Valley as an up-and-coming destination. Styling the city’s most fashionable residents, Undefeated has a diverse selection of the coolest sneakers, clothing, and caps. Shop for vintage one-of-a-kind items and apparels at Reliquary, just around the corner. This neighborhood trump feels both enchanting and unhurried. Comic book nerds and aficionados meet at Isotope on Fell Street. More than just a comic book store, Isotope is also a place for art, workshops, and relaxation. Chill out on one of their comfy sofas with a graphic novel in hand while discussing the latest adventures of Spider-man, Batman, and the X-men.

Just as diverse as the district’s shopping scene is the munchscape, ranging from casual eateries to posh diners. On sunny afternoons people line up for one of the many food trucks that cruise the city. Within these mobile mini-kitchens talented rookies and established chefs cook up the most delicious meals for the most satisfying prices. Baking a mean Arugula pizza, Casey’s Pizza truck has been spotted regularly on Saturday afternoons. Derived from ‘mazza’, meaning small dishes of appetizers in Arabic, Lebanese corner restaurant Mazzat serves hummus and tapas-like dishes. Every morning, grandma prepares fresh meals for the day, making this family-enterprise highly authentic. Souvla on Hayes St. is the newest addition to the exclusive Greek dining scene in San Francisco. In this rather modern walk-in, a communal table for twelve replaces the typical ramshackle seats that one might expect in traditional Greek diners. With all those enticing fragrances, choosing between pork, chicken, or lamb (or veggie) has never been this hard. No place else screams bearish German food like Rosamunde Sausage Grill in Haight Street, just west of Hayes Valley. Head here for a hearty sausage on a bun or gigantic burger, only served on Tuesdays. Expect little space to maneuver yourself to the counter as this joint is gaining popularity.

Acknowledging the great marriage between sausage and beer, next-door Toronado allows you to bring in your grilled meat. Their infamous selection of beers and divey vibe make this place one of the Bay area’s finest beer bars. If you’ve become intrigued by San Francisco’s street art scene don’t forget to take a quick peek at the mysterious ‘Two Beauties’ mural on the corner of Steiner and Haight Streets. For tall mugs of German beer, descend back to central Hayes Valley’s Biergarten. The dozens of picnic tables, alongside the shipping containers that house the bar and kitchen, are packed with people looking to spend a carefree, sunny afternoon. Cross the Atlantic in the belly of a pirate ship in Smuggler’s Cove. Looking like the set of a Pirates of the Caribbean movie, this tiki bar serves up great cocktails and ensures a fun time. One of the lesser-known music venues, Rickshaw Stop, is the go-to place for live music of your favorite indie band or underground DJ. This venue on Fell St. gives you the opportunity to see up-and-coming acts before they go viral.

If it’s department stores, Michelin stars, and nightclubs that you’re after, you came to the wrong place. But if you are looking for trendy shoes, finger foods, and happy-go-lucky drinking, Hayes Valley will win you over. The neighborhood’s unconstrained atmosphere provides a breath of fresh air compared to downtown’s fast pace. Together with the community’s appreciation of innovative ways of living, this completes the recipe for San Francisco.