Our intern Laura visited Mexico City over the holiday break. Below she describes the sights, sounds, tastes and smells of Coyoacàn, a peaceful, yet exciting neighborhood.

I am Laura, a 22-year-old French girl living in San Francisco for a six-month period. When I arrived in California in October I planned to explore Mexico, especially since a friend living in Mexico City invited me to visit him. Eventually, I got the opportunity to go around the holidays, which allowed me to enjoy the incredible decorations. Plus I have to say, for a girl coming from a cold French region, walking around wearing a short skirt in December is pretty exciting!

After landing, the first thing that caught my attention was the size of this city. At 573 square miles, Mexico City is 14 times larger than Paris! I figured that I could not see everything, I had to make choices. With only 8 days in the city, what did I absolutely need to see? For years I knew I wanted to see Frida Kahlo’s house, so exploring its neighborhood seemed like a great plan. Located right in the heart of the city, Coyoacán is one of the 16 boroughs of the Federal District. “Indeed, you can’t leave Mexico without experiencing this area” my friend told me. This became clear to me when he dropped off at Plaza Hidalgo only on the second day of my trip, the last day of 2013. 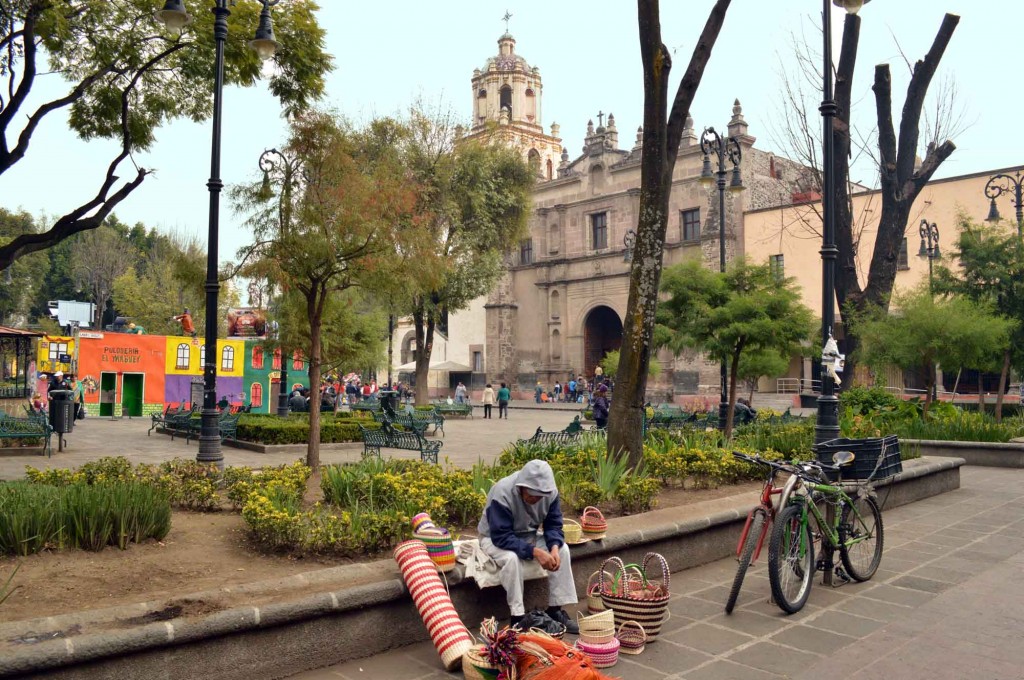 San Juan Bautista church was built in the 16th century

A melody of salsa

The first thing I noticed in Coyoacán was the architecture. Buildings are very low, and their colors are so crazy. I noticed the huge contrast between them and the grey color of the crumbling San Juan Bautisto baroque church façade. Inside the church, the ceiling is covered with very interesting colonial paintings. The different tints were amazingly bright, backgrounds, so dark and depth of field was almost not represented. I felt very lucky to see this church, so different from the roman and gothic arts in my own country.

After a while, I came back out to the fresh sunlight. It was nine in the morning, time when waiters are tying aprons around their waist, when old men meet on a bench, trying to solve world’s problems. A light breeze, twittering birds and the scent of coffee hung in the atmosphere. The city was waking up leisurely, and I found everything so quiet, unlike the rest of the city. However, I changed my mind pretty quickly! Once the first stools have been set on cafes terraces, the area became more alive. Even at this time, melodies of salsa music escaped from windows.

Nearby, I saw a yellow gate with an arched shape. Just above, “Bazar artisanal mexicano” had been hand-painted. A craft market? Without hesitation, I went for it! After walking through the first food stalls, I found a genuine Ali Baba’s cave. Surrounded by lime, corn and fried food smells, I jumped in this colorful crowded shamble. Exotic fruits, spices, sombreros, traditional clothes and trinkets, but also posters, scrap metals, sheets were for sale all around me. Strolling among the pervasively draped fabrics and the frolicsome children, I just had the feeling I could find everything here! “Que vas a comprar hoy, chica?” A work-worn hand grabbed mine, it was an old woman offering a henna tattoo. Amused by being constantly called out to buy, I always answered with a smile or a polite “No, gracias!” 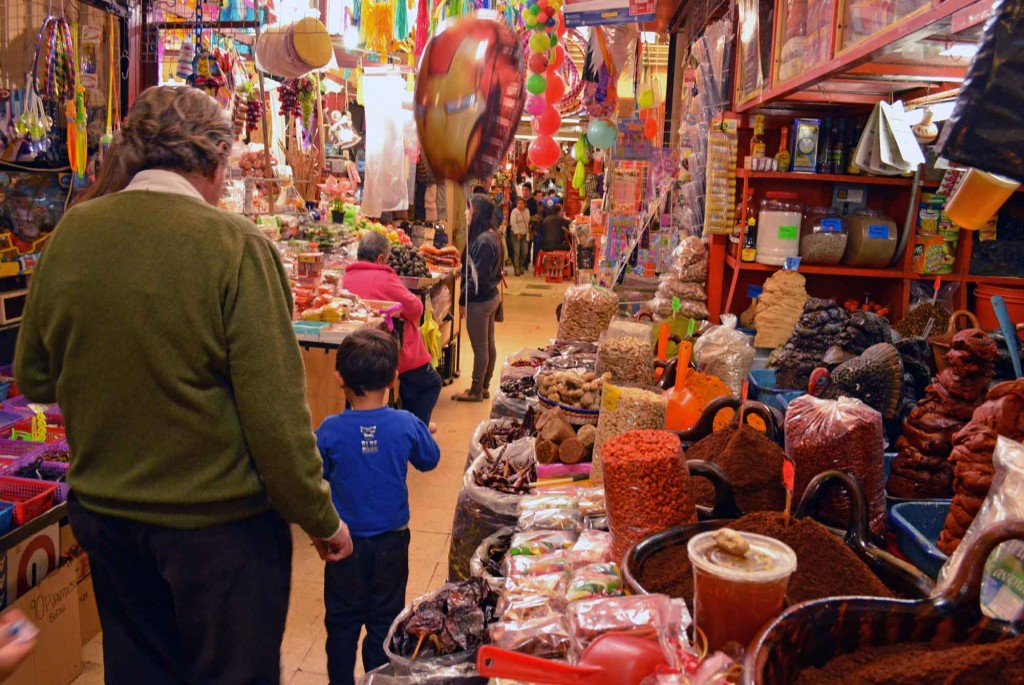 The Bazar Artisanal Mexicano probably sells everything you can imagine

Time to meet my friend for lunch was already here. “La Coyocana, 1pm” he told me. When I arrived, he and his family were already enjoying a michelada, the mix of lime, tomato juice, pepper slices and beer, the alleged “perfect hangover drink”. They all were sitting in nice-looking chairs in this wonderful courtyard. Traditional decorations were hanging above the tables, waiters were running, straddling on every side of the yard, trying to serve everyone as fast as they could. This was such a special place, it literally took my breath away as soon as I arrived. Instead of a michelada, I ordered an agua de horchata -the most refreshing beverage in the world. It is made of rice, almonds, sometimes cinnamon and often vanilla: my new addiction!  The sunlight filtered through the draperies sometimes reaching us, and a fresh breeze stroked our skins. Then, el Molcajete came. To describe it clearly I would say it’s a big stone bowl with three feet that is sometimes used as a grinder.  My molcajete however contained a traditional Mexican assortment: pork and beef, chorizo, tomatoes and greens onions, with chicharrón–huge pieces of crispy pork rind, all accompanied by the inevitable tortillas. 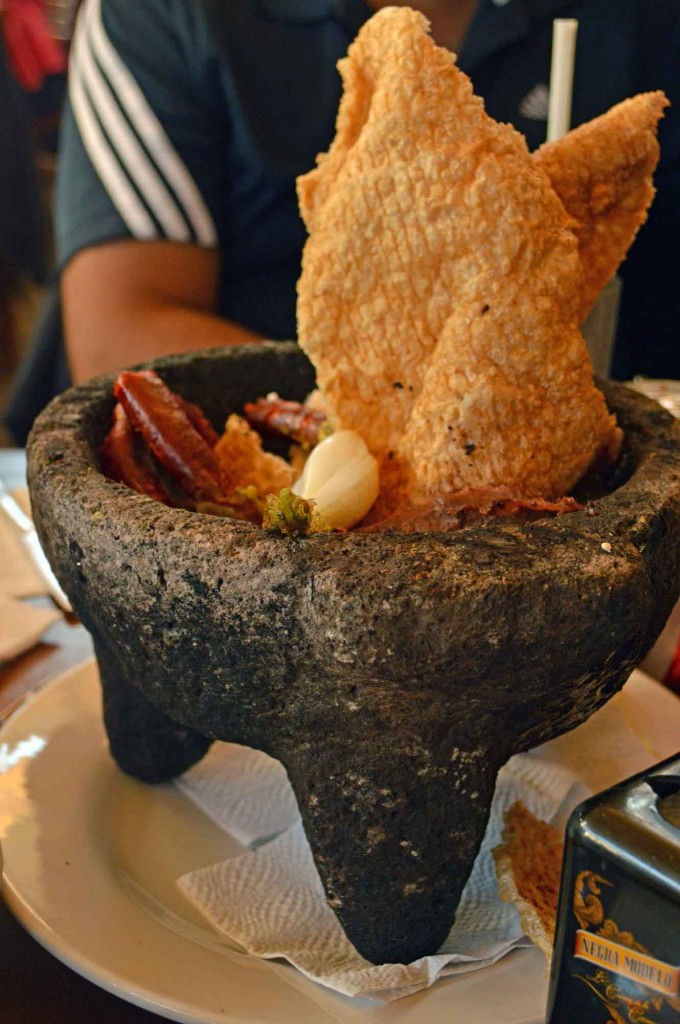 Aware that this plate was invented by pre-Hispanic cultures, eating from it felt like a journey back in time!  I was wholly amazed by the beauty of this spot and by the charming scene unfolding around me. While we were enjoying our food, a group of six costumed men were singing very loudly: some were playing the guitar, some the violin and even the triangle. I knew they were mariachis, Mexican folk musicians, but this was the very first time I was seeing them for real. Suddenly, they came to us! I didn’t know what to do, but my friend’s mother knew: after handed them a bill, she whispered something to them and they started playing for us. One of the best memories from my Mexican trip! 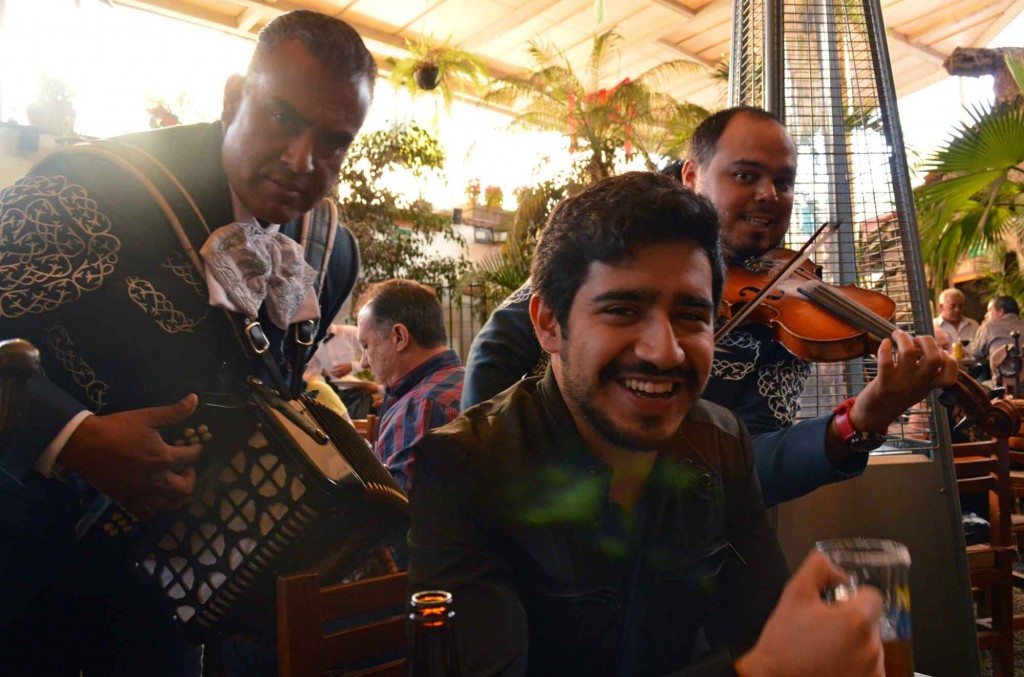 To continue this perfect moment with art, I decided to go to the famous Frida Khalo Museum, which is in fact the house where she was born and always lived. Again, being in this place was like walking through time. For me, it was very sad and surprising to see how much she suffered since her childhood. The house, her sanctuary, is so calming, it’s hard to imagine how tormented her life had been. What I found most moving was seeing the painting Viva la vida, probably because it was so simple, so pure and almost infantile. Knowing that she created this painting, despite the fact that she was dealing with such dreadful pain, made me even more fascinated by this woman.  To me, it just seemed to be an explosive hymn to life. The house is brimming with light, colors, life and the gorgeous surrounding blue is impressively stirring. 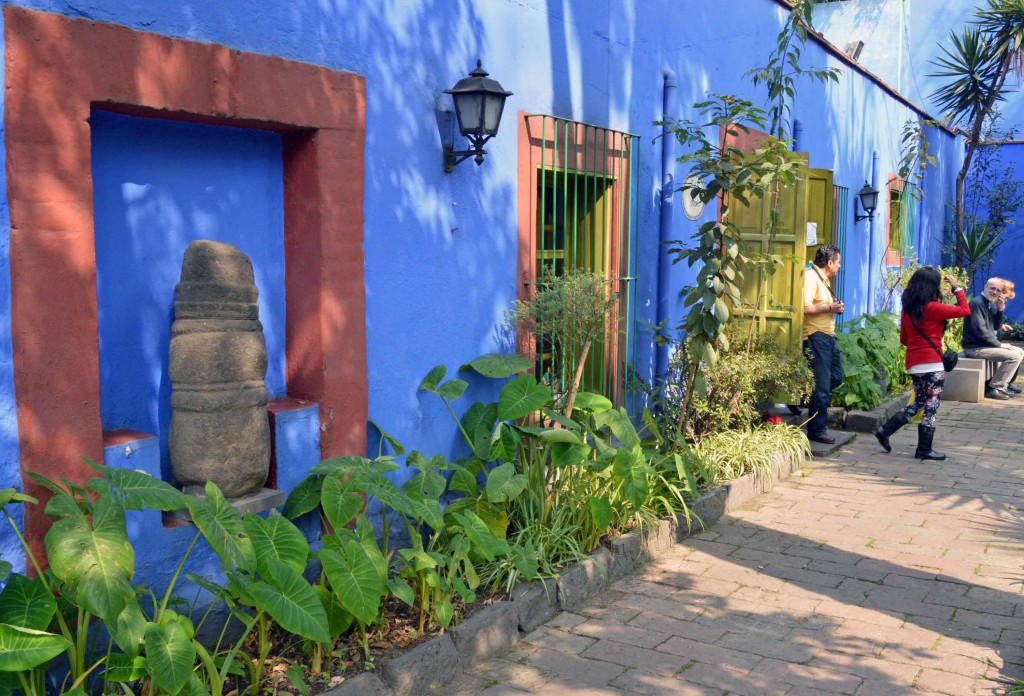 The famous blue walls of the Frida Khalo Museum

During the last part of my visit, I examined a temporary exhibition featuring pieces of her wardrobe.  What was really thrilling to me was that I understood that her firmness, her toughness and her confidence was in fact a way to hide her vulnerability, her frailness. That’s how I realized she was a mix of weakness and strength. More than a touristic experience, visiting Frida Kahlo’s museum was a profound experience for me.
Coyoacàn has so much history that makes it a huge part of Mexico’s soul. From my first steps on Plaza Hidalgo, I felt the spirit of this place. Every time I close my eyes now, I dream of going back there for a nice ramble.