Yes yes, another Korean restaurant. I fully intended to venture into the Inner Sunset and stuff my face with crack chicken (that’s for another day) but, well, I was tired. It was cold. And Muguboka has the misfortune of being so close to my apartment that I can literally spit on it.

Muguboka is very plain outside and in; its name isn’t even written on the awning and instead, is on a tiny sign hidden on the side of the building.

It specializes in what I qualify as home-style Korean cooking – lots of classics, cooked competently. The flavors have definitely been Americanized somewhat – the gochujang for the bibimbap tastes like it has been watered down, the kimchi jiggae lacks a certain edge (that edge, as amply demonstrated at restaurants in Korea, often left me gasping for water). 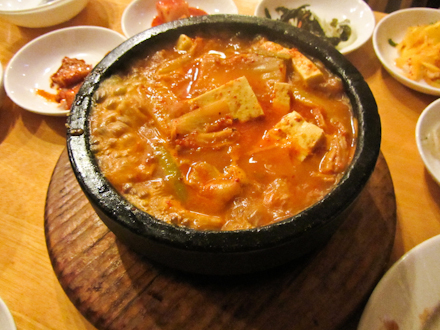 If only you were a little spicier…

But Muguboka definitely hits plenty of right notes. The banchan is plenty and varied. The staff eagerly brings you thoughtful freebies (sometimes this is a seafood pancake; sometimes a steaming bowl of soup) and will fill your side dishes happily – once you catch their attention. We ordered their fried chicken for the first time, and it was nicely seasoned, with just the right note of sweetness. Their décor is a touch quirky; it’s not often you see a framed bible quote juxtaposed with a photo of a topless woman advertising alcohol positioned directly below (and best of all, I think it’s entirely accidental). 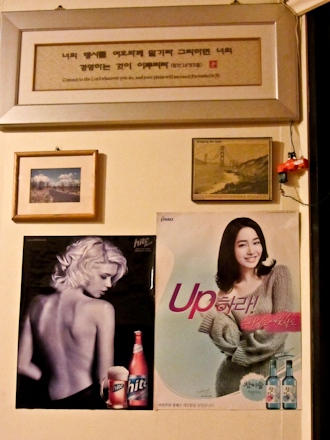 Proverbs 16:3, and the saucy Hite lady

I wouldn’t recommend Muguboka to any stern-faced SF foodies, looking for the Most. Authentic. Korean Food. Ever. But that’s okay, really – I would like to keep Muguboka hidden from them, where I can walk the three meters from my apartment to their door, and enjoy my soup and bottomless side dishes free from reproach.

Do you agree with this review? Let us know in the comments section, or via our Facebook and Twitter accounts!