Believed to be a creation of Lord Parashurama, the region of Konkan is an alluring stretch of land that extends from Maharastra’s Palghar district and further runs parallel to the Arabian Sea to meet Dakshina Kannada in Karnataka. A charming getaway for those seeking scenic rendezvous, cultural nuances, and gastronomical wonders, Konkan is an unparalleled treasure awaiting your arrival with hidden gems in tow.

While Konkan is a traveler’s treat throughout the year, its visual appeal is best captured during the monsoon. It is replete with many immensely popular destinations that range from Malvan’s Tarkarli Beach to the formidable Sindhudurg Fort and the unmissable Dudhsagar Falls. However, its not- so-popular attractions are what make this picturesque region a paradise for the traveler who wishes to tread the unbeaten path.

The Mumbai-Goa highway is a perfect route for those heading here via Mumbai, while Goa’s Dabolim Airport is the destination for tourists who fly to Konkan from across the country, but if one truly wishes to soak in the beauty of the region, Konkan Railway comes most recommended. Especially during the monsoon, the windows of the train open up to refreshing greenery. The Sahyadris form the perfect backdrop and albeit grey, the skies above the mountain range promise generous showers that reveal a blooming terrain. With more than 20 tunnels, breathtaking landscapes, earthy hues and frothy streams, the journey is an enchanting precursor to the trip that is about to unfold 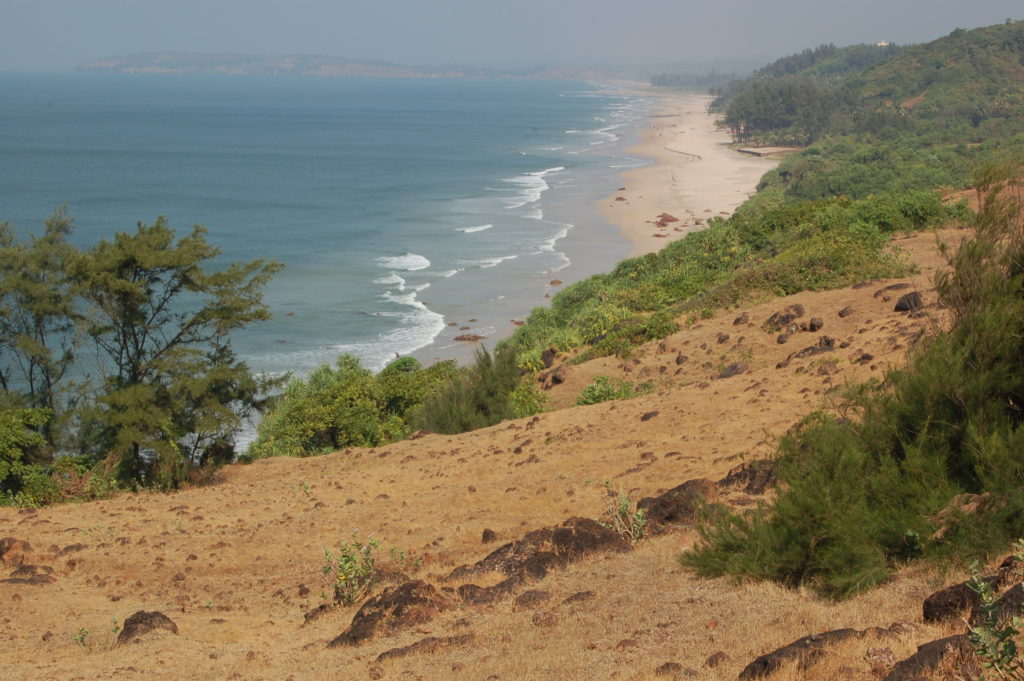 Take a lazy stroll along the pristine beaches playing hide and seek with the white-tipped waves. (Source: KalyanKundu @ Wikimedia Commons)

One should commence their Konkanscape with a visit to the beach, and there is no better place than Ratnagiri’s Aare Ware Beach to do so. This beach lies parallel to the road towards Ganpatipule. Flanked by grass-cloaked cliffs, the beach is a living celluloid featuring an overjoyed Arabian Sea perpetually rushing to kiss the sandy white Konkan shore. The panorama is a sight that could very well be Ratnagiri’s answer to the Scottish Isle. 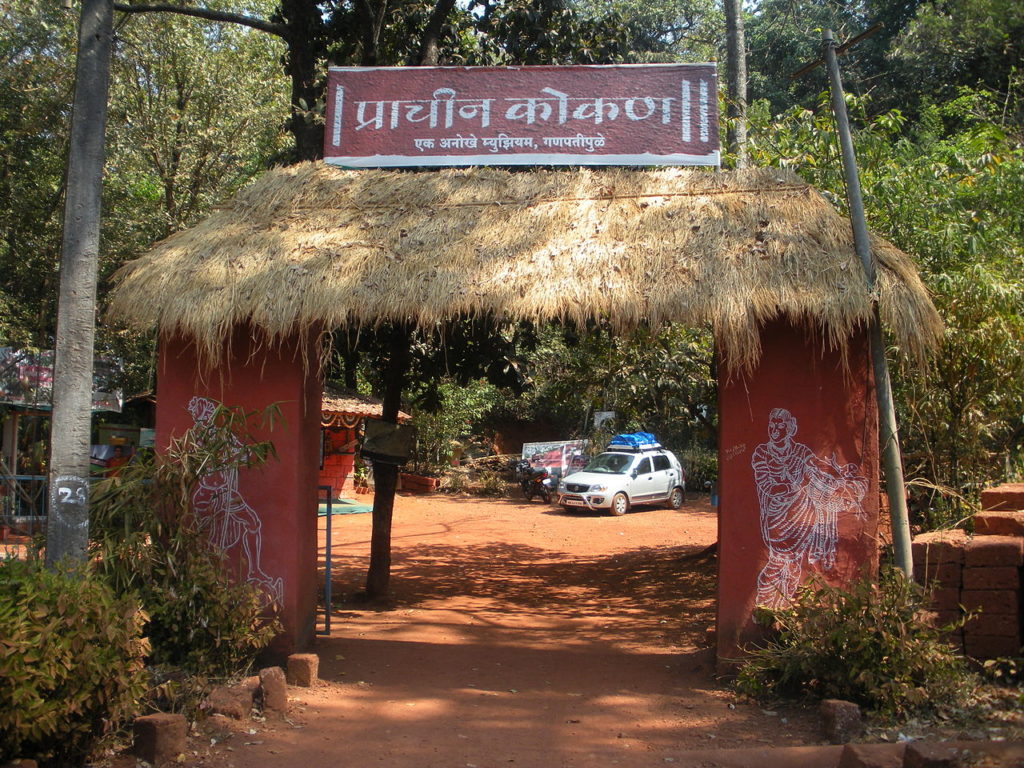 Take a step back into history when you visit Prachin Konkan. (Source: Pradeep717 @ Wikimedia Commons)

The region of Konkan is steeped in history as well as culture. The Konkani people and their peculiar way of life is a heritage that the region holds very close to its heart and the Prachin Konkan Open-Air Museum is the best place to understand its nuances. Spanning more than 1.2 hectares (3 acres), the museum is dotted with interesting exhibits that delineate life as it was in ancient Konkan. The main attraction of the museum is the display of the Bara Balutedar – life size models of twelve traders who were responsible for the smooth functioning of every village in the Konkan Region. A commemoration of Shivaji Maharaj – Maharashtra’s celebrated warrior king is yet another attraction of the museum. Ensconced in towering trees and captivating wilderness, the museum is also a birding paradise. 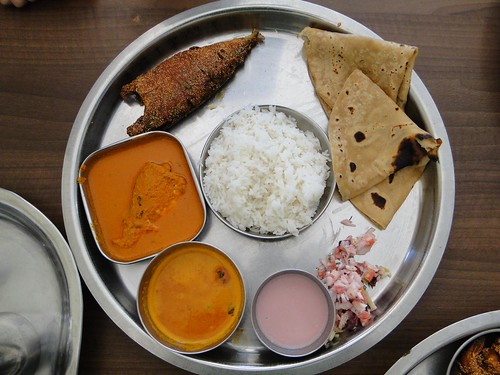 With the ocean keeping it perpetual company, fish and seafood is inextricable from the Konkan diet, and one of the best places to indulge in these oceanic flavors is Vengurla – a charming seaside town. Yet another picturesque getaway, Vengurla is one of the busiest fishing destinations of the region. Every evening, its dock is bustling with fisherfolk who make the day’s catch available to restaurant owners as well as locals at discounted prices. From tiger prawns, black and silver pomfrets, clams, Indian mackerel to huge Seer fish, glistening sardines and crabs, are all up for grabs. The road from the dock towards the city market is lined with several restaurants, each serving delectable preparations of the fresh catch. The fast selling item on their menu is the quintessential Konkani thali that is replete with a large bowl of rice, chapattis, fish curry, fried fish, some pickle and of course Sol Kadi – a must-have and must-try digestive drink. After dinner, head to the dock yet again to witness the magical stance of the Arabian sea under a moonlit sky. If you are lucky, you might even catch a glimpse or two of baby Dolphins frolicking in the tranquil waters.

The Cascade of Amboli 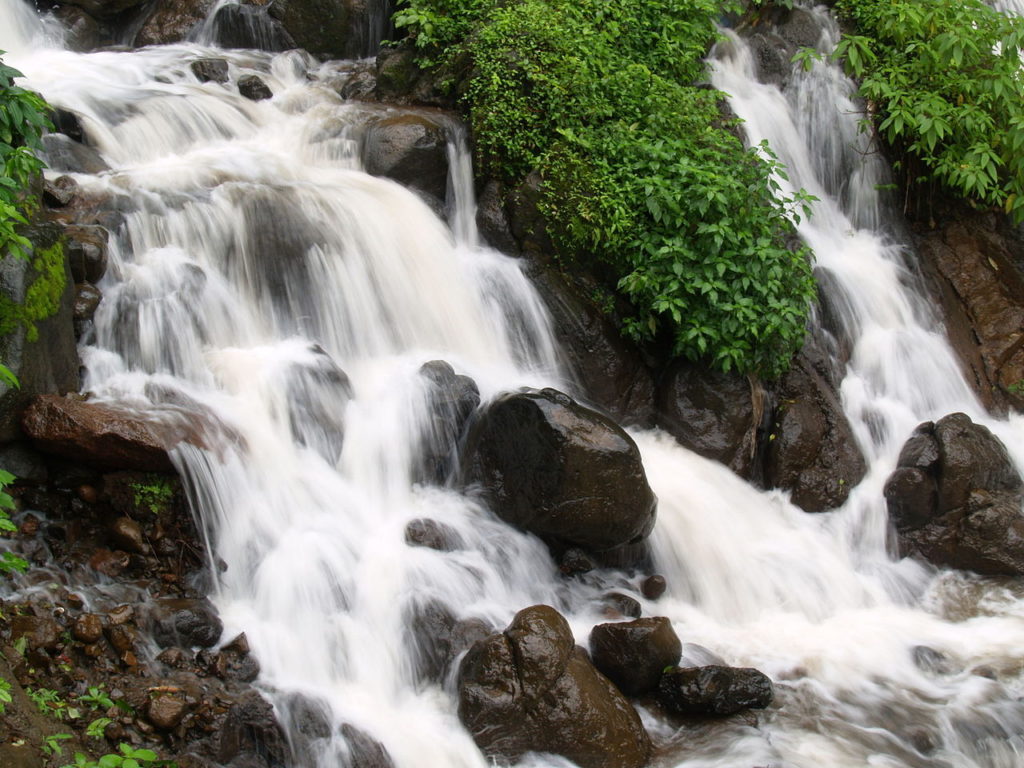 The gushing waters of the fall will mesmerize you. (Source: Ayilliath @ Wikimedia Commons)

Though, Dudhsagar is the much-acclaimed waterfall of the Konkan region, nestled amidst the foliage of the Western Ghats is yet another breathtaking cascade that can give its Goan cousin, a run for its money. The waterfall is located on the road towards the hill station of Amboli, strategically placed to drench passing vehicles and people with its refreshing spritz. The Amboli Water Falls ferociously plummets from a towering cliff with such fervor that its roar can be heard from quite afar. Its frothy water carves its way around massive boulders, to further flow into a ravine that is close to 60 meters (200 feet) deep. In the recent past, the attraction has been neatly fenced and a series of steps have been constructed to its left, to assist visitors to the top. When the monsoon is at its peak, icy-cold, angelic-white gushes of water cascade over the man-made steps unveiling a flooded staircase, a sight that even hurried drivers find hard to resist. Its captivating glory beckons hordes of tourists, locals as well as friendly primates. 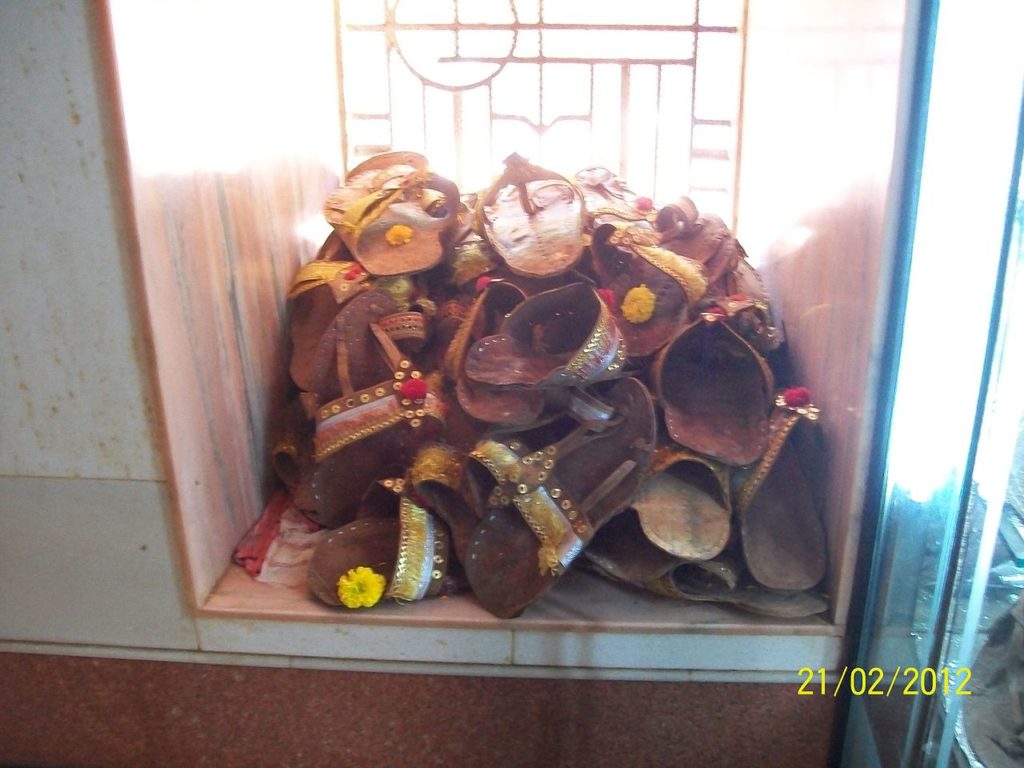 Every nook and cranny of Konkan is steeped in legends and spellbinding myths. If one seeks, every village has its own folklore to share and one such tale unfolds in the small village of Arawali, located 26 kilometers (16 miles) away from the town of Sawantwadi en route to Reddi. This village is home to a 17th-century temple that is dedicated to the protector of the village called Vetoba or Vetal – the king of all things evil. Close to 2.7 meters (9 feet) tall, the imposing statue of the deity is made with the use of five distinctive metals. Its pitch black appearance and dramatic eyes, make the deity hard to forget and stirs a sense of humility as well as curiosity among onlookers. The villagers believe that Vetoba’s blessings are essential before the commencement of anything auspicious and many also seek his intervention to overcome challenges in their lives. The entity that is believed to steer one’s mind onto to the righteous path by drowning evil thoughts, does not seek much in return from his devotees. He is oddly fond of bananas by the bunch, in addition to oversize chappals (leather footwear) fashioned out of the leather found only in Aravali. Locals believe that every night, Vetoba sets out on his weekly rounds throughout the village wearing the newly offered chappals. One can view a collection of these massive leather footwear in a glass case stationed inside the temple.

A land of swaying palms and rolling waves, Konkan takes it upon itself to slow your life down. It compels you to leave worries behind, it revives your senses, your inquisitiveness, gets you up and close with nature, heals all of you that was sore and ensures that you’d come back for more.

One thought on “Konkan – A Monsoon Wanderlust”